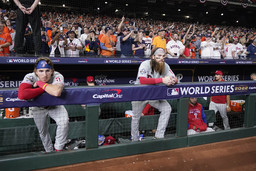 One of the Philadelphia Phillies' most fearsome sluggers popped up foul on a two-strike bunt attempt with his team one inning from World Series elimination. That bizarre strikeout spoke more loudly than Schwarber's third Series homer, which briefly put Philadelphia ahead.

After taking a 2-1 lead in the Fall Classic, the Phillies fizzled at the plate and lost three in a row - the last a 4-1 defeat Saturday night that gave the Houston Astros the World Series title in six games.

"They have good pitching," Schwarber said. "Their pitching has been pretty spot on."

After ending an 11-year playoff drought and becoming the first third-place team in baseball history to reach the Series, the Phillies fell short of winning their first crown since 2008.

"We went through a dry spell at the wrong time," said Rob Thomson, unable to join Bob Lemon and Jack McKeon as the only managers to take over midseason and lead a team to the title. "You've got to give credit to their pitching."

Philadelphia batted .101 (9 for 89) with 38 strikeouts, three runs and three extra-base hits in the three straight losses, which included a combined no-hitter by the Astros in Game 4 and a three-hitter in Game 6. Philadelphia batted .163 in the Series overall - the lowest for any team since Detroit was held to .159 while getting swept by San Francisco in 2012.

"We expect to be here next year and the year after," Hoskins said. "When you can keep a group together, that's when I think you can see a good team go on a multiple-year run of having a chance to win a championship."

Philadelphia's 71 strikeouts over the six games were a Series record, breaking the mark set by Arizona in a seven-game Series win against the New York Yankees in 2001 and matched by Tampa Bay in a six-game loss to the Los Angeles Dodgers two years ago.

Reaching the World Series was a surprise for the Phillies, who were 22-29 when Thomson replaced fired manager Joe Girardi on June 3. They were the 12th and final team to clinch a berth in the expanded playoffs, an October afterthought that would have been watching at home under the previous postseason format.

"If in the beginning of the year, if you asked a bunch of people or baseball specialists if we were going to be in the World Series, they would have probably said no," Castellanos said. "We were two wins away from being the best team in North America. So, it's just a building block."

After finishing 87-75 during the regular season, Philadelphia swept two games from NL Central champion St. Louis in the new wild-card series and upended NL East champ Atlanta, a 101-game winner, over four games in the Division Series. Then the Phillies beat San Diego in five games in an all-wild card NLCS.

"This is sustainable, this type of winning atmosphere and winning team," Thomson said. "They have accomplished a lot. It's still disappointing, though. And I told them after the game, I said, `You guys have nothing to be ashamed of. You don't need to hang your head for anybody.'"

"I'd imagine that we're going to be the same team but with some more pieces to make us that much better," he said.

Schwarber thought about the Astros' celebrating in the other clubhouse.

"That taste is there now and it is an addicting feeling," Schwarber said. "We know what it takes now in our minds."