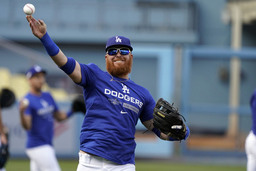 The Los Angeles Dodgers third baseman was to be presented the award before Game 3 of the World Series on Monday night, two years after he was criticized by the commissioner's office for violating coronavirus protocols by celebrating with teammates following the title-winning Game 6.

Turner, 37, was nominated for the award for the fifth time this year.

Turner and his wife donated $100,000 to The Dream Center, which supports the homeless and hungry, to fund its foster care intervention program. The center last year renamed its food bank after Turner and his wife.

Turner and his wife donated more than $100,000 for Children's Hospital Los Angeles, where he serves on the board of directors, and they provided more than 70,000 toys and 14,000 bicycles to children in Los Angeles. They also visit patients at UCLA Mattel Children's Hospital, serving as hosts of its Walk and Play LA event, and at Cedars Sinai Hospital. They sent get-well videos to children around the country and serve as honorary hosts for CHLA's Walk and Play LA event.

He served as race starter for this year's LA Marathon, helping raise more than $70,000, and his foundation helped renovate Transition House, a downtown Los Angeles facility for homeless veterans.

A two-time All-Star, Turner would become eligible for free agency after the World Series if the Dodgers decline a $16 million option in favor of a $2 million buyout.

Turner was pulled from Game 6 two years ago after the seventh inning when MLB was notified he tested positive for COVID-19. Turner refused instructions from security to leave the field during the postgame celebration, behavior MLB said risked the safety of others.