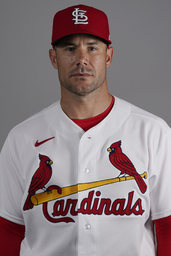 MIAMI (AP) Skip Schumaker was a candidate to take over as manager of the Boston Red Sox and New York Mets in recent years, only to see those clubs pick someone else.

The Miami Marlins didn't let him get away.

Schumaker has been hired by the Marlins to become the 16th manager in franchise history, a person with knowledge of the negotiations said Tuesday. The person spoke on condition of anonymity to The Associated Press because the Marlins had not announced the hiring.

He comes to Miami from St. Louis, where he spent this season as the bench coach. Schumaker had been a first-base coach and associate manager for San Diego from 2018 through 2021, then joined the Cardinals' staff.

The 42-year-old Schumaker takes over in Miami for Don Mattingly, who managed the Marlins for seven seasons. Mattingly went 443-587 with Miami, winning the NL Manager of the Year award after leading the Marlins to the playoffs in the pandemic-shortened 2020 season.

Mattingly's contract expired when this season ended, and he and the Marlins' front office - owner Bruce Sherman and general manager Kim Ng - agreed it would be best for both sides not to enter into a new deal.

That prompted a search by Miami, and Schumaker became the pick.

Schumaker played in the majors for 11 seasons, mostly with the Cardinals, and now gets his first managerial opportunity with Miami - which shares a spring training complex in Jupiter, Florida, with St. Louis.

Schumaker was a starter for the Cardinals team that won the 2011 World Series. The California native batted .278 in 1,149 games while primarily playing second base and the outfield. He retired in March 2016 while in camp with the Padres on a minor-league deal.