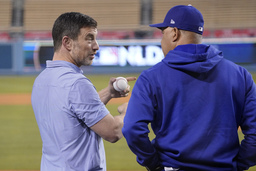 LOS ANGELES (AP) Andrew Friedman is still trying to make sense of how things went so wrong for the Los Angeles Dodgers this October.

The Dodgers president of baseball operations is digesting one of the worst -- if not the worst -- collapse in team postseason history. After posting a franchise-record 111 wins and making their 10th consecutive playoff appearance, they lost 3-1 in the NL Division Series against the San Diego Padres, a team they beat 14-5 in the regular season.

During the NLDS, the Dodgers had an 0-for-20 stretch with runners in scoring position.

"The last three days have been incredibly difficult, and I'm not sure exactly when that's going to dissipate," Friedman said Tuesday.

"I think it's natural to go back and think through it. Obviously, everyone wants a clear-cut answer," he said. "If you're able to boil it down in its simplest form, in the regular season, we led baseball in every statistical category with runners in scoring position. In this series we were not good . the question is, is it baseball or are there things we can do to improve on that?"

Friedman will spend the offseason searching for the answer.

On the day the NL Championship Series was set to start just down the I-5 freeway between the Phillies and Padres in San Diego, Friedman and general manager Brandon Gomes sat in a news conference in an empty Dodger Stadium trying to explain the postseason that went bust.

"Expectations here are incredibly high and that's awesome," Friedman said. "I love how passionate our fans are. Those expectations are shared by everyone that works here, in the front office, the coaches room, Dave, our players. I personally don't think the criticism Dave has received has been fair. I think it's human nature to want to point the finger at someone. I feel this was an organizational failure in the postseason."

"Nothing has changed," Friedman said. "My strong hope is that Clayton Kershaw is pitching here next year, but like I said last year, for him to take the time to put his head together with Ellen and figure out what makes the most sense for their family is what we'll afford them the time to do."

Justin Turner resurrected his career with the Dodgers and became one of the best hitters in baseball, but it's unclear if the Dodgers will pick up his $16 million option for 2023.

"Those are all personnel things that we'll spend more time on," Friedman said. "He's been a huge part of our success. Been right in the thick of everything as long as I've been here. Answering definitively about what next year's team is going to look like right now is really difficult. We're going to take time and meet as a group to get into those things."

Friedman was visibly annoyed when asked if it was Roberts or the front office was making on-field decisions in the playoffs.

"After every single postseason I've answered that question, so I don't feel that's the narrative," Friedman said.

Asked if Roberts makes those decisions, Friedman said: "100%. We've answered this a lot of times. I'd really like to not answer it next year. Well next year, hopefully it's after a parade. It's been very clearly answered here a lot of different times. If it ever changes, I'll let people know. I don't think it ever will. If it ever does, I will let you know."