Dodgers have much to contemplate during long winter 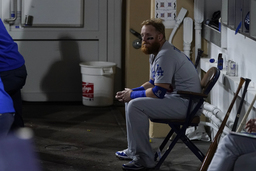 LOS ANGELES (AP) After all their gaudy statistics during the regular season - 111 wins, Freddie Freeman and Trea Turner powering the offense - the Los Angeles Dodgers appeared on their way to fulfilling manager Dave Roberts' spring prediction of another World Series victory.

The San Diego Padres squelched those plans, upsetting the Dodgers in four games to win their NL Division Series and providing a stunning end to a historic season in Los Angeles.

Two years removed from winning their World Series championship in the pandemic bubble, the Dodgers have much to contemplate and plenty of time to do it during the long offseason.

Walker Buehler is expected to miss most and possibly all of the 2023 season after undergoing his second career Tommy John surgery in August.

Kershaw, the three-time Cy Young Award winner who turns 35 in March, has indicated he'd like to return to the only team he's ever played for during his 15-year career. He was on a $17 million, one-year deal this season.

Anderson, the All-Star left-hander, had a breakout season in his first year with the Dodgers. The well-traveled veteran had a 2.57 ERA in 178 2/3 innings.

Signed for $8.5 million before the lockout began, Heaney started the season on an encouraging note but then missed two stretches because of shoulder strains. Making his postseason debut, the left-hander gave up a home run to Trent Grisham in a 2-1 loss to the Padres in Game 3.

Dustin May and Blake Treinen returned from health issues in time to make the division series roster and should be ready for spring training.

The Dodgers figure to part ways with closer Craig Kimbrel, who was demoted from his ninth-inning role with two weeks left in the regular season and got left off the postseason roster.

Turner becomes a free agent after the World Series ends and would be a sought-after player among what appears to be a strong shortstop class.

He made his second straight All-Star appearance in his first full season with the Dodgers.

After splitting time between Washington and LA last year, Turner hit .298 and finished second in hits behind teammate Freeman with 194. Turner tied for second in at-bats and plate appearances, and tied for third in singles among MLB leaders. He sprained his right ring finger in the eighth inning of Game 3 against the Padres but started in Game 4.

David Price has indicated he plans to retire. The 37-year-old left-hander was left off the division series roster after a wrist injury curtailed him in September. Price, who won the World Series with Boston in 2018, opted out of the 2020 season because of the coronavirus pandemic and was used mostly as a reliever over the last two seasons.

The Dodgers hold a $16 million team option for 2023 on third baseman Justin Turner, who hit .278 while splitting starts as the designated hitter. He was just 2 for 13 in the NLDS. The 37-year-old is a fan favorite and a well-respected voice in the clubhouse. But the future already is here. Miguel Vargas made the NLDS roster at age 22, impressing Roberts with his ability to hit to all fields and overall cool-headedness. The Dodgers could choose to pay Turner's $2 million buyout and move on with Vargas at third.

Cody Bellinger will enter his final year of arbitration eligibility with his future seemingly in doubt. Three years removed from being the NL MVP, the outfielder was benched for the last two games of the division series. He hit .193 with a .611 OPS over the past two seasons and the Dodgers may not want to shell out more money for a player whose excellent defense doesn't make up for his poor hitting.