Bruce Sutter, split-finger ace and Hall of Famer, dies at 69 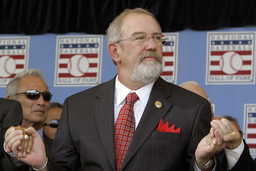 When Bruce Sutter began experimenting with the split-fingered fastball, he wasn't looking for a path to Cooperstown. He was just hoping to save his career.

"I wouldn't be here without that pitch," Sutter said shortly before his Hall of Fame induction in 2006. "My other stuff was A ball, Double-A at best. The split-finger made it equal."

Sutter, the full-bearded closer who paid for his own elbow surgery as a low minor leaguer and later pioneered the sharp-dropping pitch that came to dominate big league hitters for decades, died Thursday. He was 69.

Sutter was recently diagnosed with cancer and in hospice surrounded by his family, one of Sutter's three sons, Chad, told The Associated Press. The Baseball Hall of Fame said Bruce Sutter died in Cartersville, Georgia.

A six-time All-Star, Sutter led the National League in saves for five years and won the 1979 Cy Young Award. He posted 300 saves in a 12-year career with the Chicago Cubs, St. Louis Cardinals and Atlanta Braves.

Sutter played in a era when closers routinely got more than three outs. He threw more than one inning for 188 of his saves and five times pitched more than 100 innings in a season.

At his bedeviling best, he tossed two perfect innings - retiring future fellow Hall of Famers Paul Molitor, Robin Yount and Ted Simmons - to finish off the Cardinals' Game 7 win over Milwaukee in the 1982 World Series.

The team victories, son Chad said, counted most to Sutter.

"I mean, he won all these awards and all this stuff and they weren't even hung out in the house because all he cared about was winning and being respected by the other players and being a good teammate. That was his whole motivation," Chad Sutter told the AP by phone on Friday.

"The awards, you know, after he retired, that was kind of the time where he was like, `Man, I did OK, you know.' Being a teammate was what mattered most to him," he said.

Sutter was the fourth reliever to be elected to the Hall, after Hoyt Wilhelm, Rollie Fingers and Dennis Eckersley. Mariano Rivera, Goose Gossage, Lee Smith and Trevor Hoffman have since joined the list.

MLB Commissioner Rob Manfred said he was "deeply saddened" by the news.

"Bruce was the first pitcher to reach the Hall of Fame without starting a game, and he was one of the key figures who foreshadowed how the use of relievers would evolve," Manfred said in a statement. "Bruce will be remembered as one of the best pitchers in the histories of two of our most historic franchises."

Sutter was born in Lancaster, Pennsylvania, in 1953. Drafted by the Washington Senators in the 21st round in 1970, he was only 17 and too young to sign.

After a brief college stint at Old Dominion, he returned home and was pitching for the semi-pro Hippey's Raiders in the Lebanon Valley League when a Cubs scout spotted him.

Sutter pitched twice for the Cubs team in the rookie Gulf Coast League in 1972 before hurting his right elbow trying to learn a slider. Afraid the Cubs would cut him if they knew he was injured, Sutter scheduled his own surgery and used his bonus money to pay for the operation.

Unable to throw as hard as he could previously, Sutter had the good fortune to learn the split-fingered fastball from Cubs minor league pitching instructor Fred Martin at spring training in 1973.

"Nobody was throwing what he called the split-finger," Sutter once said. "It was a pitch that didn't change how the game was played, but developed a new way to get hitters out. Everybody who throws the split-fingered fastball owes a great deal of thanks to Fred Martin (who died in 1979) because he was the first one to teach it."

The pitch - the ball held between the index and middle fingers and suddenly dips as it approaches the plate - had been around for a bit, most prominently championed by former big leaguer Roger Craig, but wasn't being successfully thrown.

"It came to me easy, but it took a long time to learn how to control it," Sutter said. "I could throw pretty hard. I might strike out 16 guys, but I might walk 10. I mean, I was wild."

"Being a St Louis Cardinal was an honor he cherished deeply," the Sutter family's statement said. "To the Cardinals, his teammates and most importantly to the greatest fans in all of sports, we thank you for all of the love and support over the years."

Sutter finished with three seasons in Atlanta. His last save, No. 300, came with the Braves in 1988.

"Bruce was a fan-favorite during his years in St. Louis and in the years to follow, and he will always be remembered for his 1982 World Series clinching save and signature split-fingered pitch," Cardinals owner and CEO Bill DeWitt Jr. said in a statement. "He was a true pioneer in the game, changing the role of the late inning reliever."

The Cardinals retired Sutter's No. 42 years after MLB retired the number in honor of Jackie Robinson.

The Cardinals said Sutter is survived by his wife, three sons, a daughter-in-law and six grandkids.

"All our father ever wanted to be remembered as was being a great teammate, but he was so much more than that," the Sutter family said in a statement Friday. "He was also a great husband to our mother for 50 (years), he was a great father and grandfather and he was a great friend. His love and passion for the game of baseball can only be surpassed by his love and passion for his family."

Chad Sutter said his father "didn't suffer and he went and went quick and he went peacefully, surrounded by all of his loved ones."

"I feel like a brother passed away," said Hall of Fame pitcher Jim Kaat, Sutter's teammate on the 1982 champion Cardinals. "I knew Bruce deeper than just about any other teammate. We spent a lot of time together, and as happens when your careers end, you go your separate ways. But we stayed in touch and considered each other great friends."