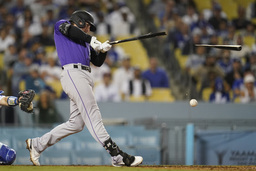 DENVER (AP) The Colorado Rockies parted ways with hitting coach Dave Magadan after a season in which the team averaged a franchise-low 4.31 runs per game.

Colorado's offense struggled with slugger Kris Bryant limited to 42 games due to back soreness and plantar fasciitis. The team had a .254 average, which was the second-lowest in team history behind last season's .249 mark. Their 149 homers also were the second-fewest over a full season in franchise history.