Japan's Munetaka Murakami gets into home run act, too 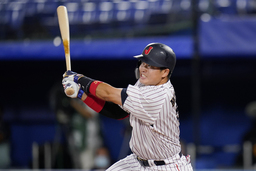 TOKYO (AP) In a season of home run milestones in American baseball by Albert Pujols and Aaron Judge, 22-year-old Japanese slugger Munetaka Murakami has also gotten into the act.

Murakami, playing for the Tokyo-based Yakult Swallows, hit his 56th home run of the season on Monday, pushing him alone into second place on the single-season list. It was the Swallows' last regular-season game.

The hit came in the seventh inning against the DeNA Bay Stars at the Swallows' Jingu Stadium.

Wladimir Balentien holds the Nippon Professional Baseball's record of 60 home runs in a season, which he set with the Swallows in 2013.

Oh hit 55 home runs for the Yomiuri Giants in 1964, Rhodes did it with the Kintetsu Buffaloes in 2001, and Cabrera matched it with the Seibu Lions in 2002.

Murakami had gone 13 games without a home run after hitting his 54th and 55th on Sept. 13.