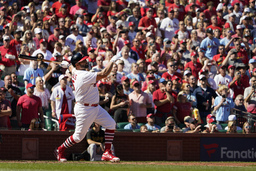 Pujols drove a 0-1 pitch from Roansy Contreras deep to center for a solo shot.

Pujols and catcher Yadier Molina, who also is retiring, were honored in a 46-minute ceremony before their last regular-season home game.

Pujols also hit a two-run double in the first inning. He has 2,214 RBIs, tying him with Ruth for second place on the career list behind Aaron (2,297).