Britton's season over, TJ surgery comeback out of time 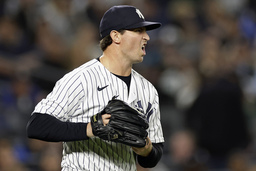 New York put the 34-year-old left-hander on the 60-day injured list Saturday and selected the contract of right-hander Jacob Barnes from Triple-A Scranton/Wilkes-Barre.

Britton was removed after throwing a tiebreaking wild pitch in Friday's 2-1 loss to Baltimore, an outing that lasted just nine pitches. The two-time All-Star had Tommy John surgery on Sept. 8, 2021, and made eight minor league injury rehabilitation appearances starting Aug. 24 and three big league appearances beginning Sept. 24. He threw 36 pitches to nine batters with a 13.50 ERA, six walks and one strikeout.

"Kind of running out of time here and having a little bit of fatigue last night, it's like one of those things, you don't want to power through that and reach for more and then do some damage as you're coming back," Yankees manager Aaron Boone said Saturday. "He's in a good spot heading into the offseason."

Britton had hoped to be able to help the Yankees in the postseason. He is eligible for free agency after the World Series.

"It's just that final sharpness," Boone said. "At this point in the season, just kind of up against it there. But he worked his tail off to put himself in this position and give himself an opportunity and certainly admire that."

Barnes signed a minor league contract with Seattle, made four relief appearances for Triple-A Tacoma, then was brought up by the Mariners and designated for assignment two days later without playing in a game. He refused an outright assignment, signed back with the Tigers and made five appearances at Triple-A Toledo. Released by the Mud Hens, he signed with Scranton on Aug. 30 and had a 2.25 ERA in 10 games for the RailRiders.

Boone said reliever Clay Holmes will not go on the IL after receiving a cortisone injection on Thursday for inflammation in his right rotator cuff. If the Yankees had put Holmes on the IL, he would not be available for the Division Series.

After playing his first game since Sept. 4 and going 0 for 3 on Froday, DJ LeMahieu said his injured right second toe felt fine and he anticipated playing Sunday. He is in a 2-for-41 slide.

"It felt good to play again," LeMahieu said. "I felt like a baseball player."

Matt Carpenter, sidelined since breaking his left toot on Aug. 8, ran on the field and will be among players reporting to training camp for Double-A Somerset, where there will be eight or nine pitchers. Boone anticipates Carpenter being available for the postseason as a pinch-hitter or designated hitter.

Right-hander Frankie Montas, sidelined since Sept. 16 by inflammation in his pitching shoulder, has resumed throwing.

"I don't know about the Division Series," Boone said, "more likely beyond."

After taking Thursday off, the Yankees will work out in the Bronx on Friday, Saturday and Sunday.