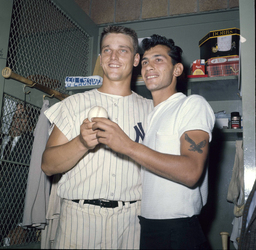 TORONTO (AP) Roger Maris Jr. considers the home run feats of Barry Bonds, Mark McGwire and Sammy Sosa to be illegitimate and says Aaron Judge should be recognized as the holder of the big league season standard if the New York Yankees slugger hits No. 62.

"He should be revered for being the actual single-season home run champ," Maris said after Judge hit his 61st on Wednesday night to match Roger Maris' record-setting total with the Yankees in 1961. "I mean, that's really who he is if he hits 62, and I think that's what needs to happen. I think baseball needs to look at the records and I think baseball should do something."

The younger Maris and some of his relatives were in St. Louis when McGwire hit his 62nd in 1998.

"I couldn't be happier for him,? Maris said at the time.

Maris sees Judge as a player worthy of praise.

"I can't think of anybody better that baseball can look up to than Aaron Judge," he said.

Maris has attended every game since Judge hit No. 60 on Sept. 20. He plans to be in the Bronx on Friday when the Yankees open a three-game series against Baltimore and doesn't expect to wait long for another historic homer.

Maris had a message for Judge in their postgame meeting.

"Get to New York and hit 62 and knock the top off Yankee Stadium," Maris recalled telling him. "It's going to be fun."