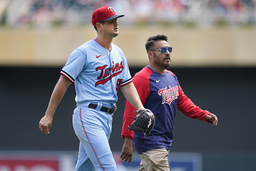 MINNEAPOLIS (AP) The MRI exam on Tyler Mahle's shoulder showed no damage, and the Minnesota Twins right-hander avoided landing on the injured list.

The Twins announced Thursday that Mahle will be listed as day to day with general soreness and fatigue, after their newest starting pitcher was pulled from his outing Wednesday in the third inning. His next turn in the rotation is unclear.

Making his third start since he was acquired from Cincinnati at the trade deadline, Mahle faced eight batters before his early exit against Kansas City. He pitched 2 1/3 innings of hitless ball, throwing 29 of 42 pitches for strikes with diminished velocity.

On July 6, the Reds placed Mahle on the 15-day injured list with a strained right shoulder, and an MRI then ruled out any serious issues.