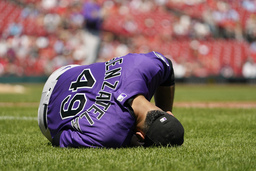 Senzatela crumpled to the ground after awkwardly attempting to cover first base on an infield single by Brendan Donovan. Senzatela had to be helped off the field and was replaced by Austin Gomber.

Blackmon was visited by manager Bud Black and a trainer after legging out an infield single in the first inning, but stayed in the game. He was replaced in the middle of the second by Wynton Bernard.