Mets' Carrasco likely out up to a month with oblique strain 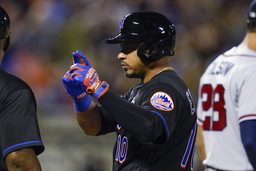 ATLANTA (AP) New York Mets pitcher Carlos Carrasco is expected to miss up to a month after straining his left oblique, the team announced Tuesday in another setback for its rotation.

The 35-year-old Carrasco, 13-5 with a 3.92 ERA in a resurgent season for the NL East leaders, was hurt Monday night in a game at Atlanta.

The Mets said Carrasco had an MRI on Tuesday that showed a low-grade strain on the left side. The club said a typical timeline for this sort of injury was three to four weeks.

Manager Buck Showalter said the diagnosis was actually good news. He feared the injury would be much worse.

"Grade 1, that's good news," Showalter said. "I thought it could be something a little deeper."

Carrasco gave up three runs in two innings in a 13-1 loss to the Braves, who trailed New York by 4 1/2 games in the division before Tuesday's game.

His outing was interrupted by a 55-minute rain delay in the second inning. Carrasco came back after the break and got the last out. He winced on his final pitch and was pulled.

"We're just going to wait to see how I feel tomorrow and go from there," Carrasco said after the game. "This is my first time that I've felt something like this. It just happened on the last pitch of the game."

Carrasco had been 5-0 with a 1.69 ERA in his previous seven starts.

Acquired with star shortstop Francisco Lindor in a trade with Cleveland before the 2021 season, Carrasco was injured and went 1-5 in his first year with the Mets.

With Carrasco going on the 10-day injured list, the Mets called up right-handers Stephen Nogosek and R.J. Alvarez from Triple A Syracuse. Also, pitcher Adonis Medina was optioned to Syracuse.

"It gives us a couple of fresh arms," Showalter said. "Not fresh, but fresher. Nobody is fresh at this time of year."

The manager was coy about reports that one of New York's top prospects, third baseman Brett Baty, was being called up to replace the ailing Eduardo Escobar.

Plagued by a sore left oblique, Escobar was scratched from the lineup for Tuesday's game after working out on the field before batting practice.

Escobar appears headed for the IL on Wednesday, which would clear room for Baty to join the club. The No. 12 overall pick in the 2019 draft is hitting a combined .315 with 19 homers and 60 RBIs for Double-A Binghamton and a brief stint in Syracuse.

"Let's see what the new sunrise brings us," Showalter said with a sly smile. "A lot of things can change tonight."

"After the workout, I didn't think it was a good idea to run him out there and maybe run the potential of hurting him to a point where it might be long term," Showalter said. "We've got to get our arms around what to do with this. I thought he was headed in the other direction, but today showed it might not be."

Escobar was hitting .216 with 12 homers and 44 RBIs. Deven Marrero replaced Escobar in the lineup at third base.

In other moves, the Mets designated outfielder Nick Plummer for assignment to make room for Alvarez on the 40-man roster and signed outfielder Travis Jankowski to a minor league contract.