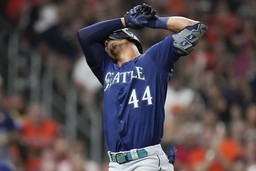 Rodriguez has been sidelined since getting hit on the wrist by a pitch in Houston on July 30. He was eligible to come off the injured list on Wednesday, but the Mariners opted to give Rodriguez another couple of days before returning to action.

The Mariners open a nine-game road trip on Friday in Texas.

Casali will be joining the Mariners for the first time after being acquired from San Francisco before the trade deadline. Casali was on a rehab assignment recovering from an oblique injury suffered in early July with the Giants.

To clear spots on the roster, Seattle optioned outfielder Jarred Kelenic to Triple-A Tacoma and designated for assignment catcher Luis Torrens. Kelenic struggled badly in his most recent stint with the Mariners, going 2 for 27 at the plate, but did hit a home run off Gerrit Cole in New York.

Torrens has been a disappointment at the plate this season, but did collect the game-winning hit to end Tuesday night's 1-0 win in 13 innings over the Yankees. Torrens is batting .214 with one home run and 10 RBIs. He hit .253 with 15 homers and 47 RBIs in 108 games last season.