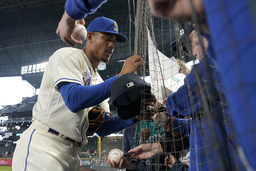 SEATTLE (AP) At the end of every warmup before starting an inning on defense in center field, Julio Rodriguez pauses. He scans the crowd at T-Mobile Park and picks a direction to send a souvenir ball into the stands.

"I wish I could just give a nice souvenir to everybody that comes to the field," Rodriguez said. "But unfortunately, it's not like that."

Not to fret. Rodriguez is doing his part to provide souvenirs and highlights for Mariners fans, and making the statement there seems to be a burgeoning star in the Pacific Northwest.

Welcome to the J-Rod Show.

When Rodriguez made the Mariners opening day roster, it was a sign the future had arrived ahead of schedule. And after a rocky first few weeks, the 21-year-old Rodriguez is thriving and proving his arrival in the majors was right on time.

He's been the AL rookie of the month in consecutive months. He was the AL player of the week last week. He may be the midseason leader for AL rookie of the year. And he could find himself an All-Star in a coupe of weeks.

There's no question Rodriguez is having fun in the process. The bat flips and shuffles rounding third after long home runs. The grins after claiming another stolen base. Fans clamoring for Rodriguez to throw them a ball before the start of every inning.

"I have to play that way. ... That's how I learned how to play the game. That's how I fell in love with the game," Rodriguez said. "I feel like it's pretty critical to me to just be able to enjoy what I'm doing. I'm doing this because I enjoy doing it and it's a pretty cool sport. Being able to play with joy I feel like is pretty important to me."

It's strikingly reminiscent of another young star who once patrolled center field in Seattle. And while it's unfair to make major comparisons between what Ken Griffey Jr. was and what Rodriguez might become, there are similarities worth noting.

Rodriguez is the only player in league history to have 15 or more homers, 15 or more doubles and 20 or more stolen bases in the first 81 games of his career.

Added to what Rodriguez is doing at the plate is he's been learning center field on the fly. He was primarily a corner outfielder in the minors.

It's not supposed to be as easy as Rodriguez appears to be making his rookie season look. He was the AL rookie of the month for May and June. Last week he hit .360 with three homers and a 1.273 OPS in seven games to be named the AL player of the week.

As his numbers have increased, so has the buzz along with Houston's Jeremy Pena and Kansas City's Bobby Witt Jr. as the favorites for AL rookie of the year at the midpoint of the season. But Rodriguez's numbers are so good his case for being on the AL All-Star team has strengthened.

If Rodriguez does end up in Los Angeles he would join extremely select company. Since the expansion era started in 1961, only 14 position players under the age of 22 have been named All-Stars in their rookie seasons. Among the names on that list: Albert Pujols, Bryce Harper, Mike Trout, Tim Raines, Johnny Bench and Rod Carew.

Does he belong in the game?

"I don't know. I just feel like I belong up here and I'm doing the best with my opportunities," Rodriguez said. "That will take care of itself."

The season didn't start this way for Rodriguez. His first few weeks were tests in patience and questions of whether he was truly ready to be in the majors. He was plagued by called third strikes that appeared outside the strike zone and building frustration with calls that weren't going his way.

But Rodriguez remained steadfast in his approach. He didn't change and start chasing pitches that weren't strikes. He showed maturity not often associated with 21-year-olds. His batting average dipped to .136 on April 21, just 12 games into his debut. In the 70 games since, Rodriguez is hitting .301.

"It was hard for him early on," Seattle manager Scott Servais said. "And I learned a ton about just his commitment to his plan, his process, whatever you want to call it. He didn't waver. And it's really unique for players not to waver. I don't care how much experience they have in this league."