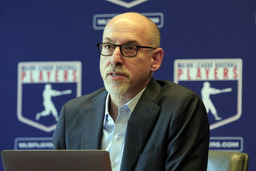 NEW YORK (AP) It appears Bruce Meyer will stick around to lead baseball players in the next round of collective bargaining in 2026.

Meyer was promoted to deputy executive director of the Major League Baseball Players Association on Wednesday after leading the union's negotiations during a 99-day lockout that ended in March.

Meyer's title is unusual for the union. Since Marvin Miller was hired as executive director in 1966, the only previous person to hold the deputy title was Tony Clark. He was promoted to the role from director of player services in July 2013 after union head Michael Weiner was diagnosed with a brain tumor. Clark took over following Weiner's death that November.

"Under Tony Clark's leadership the MLBPA has made great strides including on the business and collective bargaining fronts," Meyer said "Our union is as strong as it has ever been."

The 61-year-old Meyer is a longtime sports law attorney and litigator. He spent 30 years at Weil, Gotshal & Manges before joining the NHL Players Association in 2016 as senior director of collective bargaining, policy and legal.

Baseball's union hired him in August 2018 as senior director of collective bargaining and legal. Clark and Rick Shapiro were the most prominant negotiators in 2016, and Shapiro left the union in July 2019.

Meyer led the union through contentious and often acrimonious negotiations to start the 2020 season following the pandemic, then headed strained talks during baseball's ninth work stoppage, the first since the 1994-95 strike.

This year's lockout ended with an increase in luxury tax thresholds (accompanied by a new highest tier of penalties), a boost in the minimum salary from $570,500 to $700,000, a new $50 million bonus pool for younger players, expansion of the designated hitter to the National League, 12 postseason teams instead of 10, advertisements on uniforms starting next year, a balanced schedule that reduces intradivision play starting in 2023 and measures aimed to incentivize competition and decrease rebuilding, such as an amateur draft lottery.

The five-year agreement expires in December 2026, making it likely negotiations will start that spring.

In other moves Wednesday, Ian Penny was shifted to senior adviser to Clark in what the union announced as a promotion, and Matt Nussbaum replaced Penny as general counsel.

Nussbaum becomes only the sixth general counsel in the union's history after Dick Moss (1966-77), Donald Fehr (1977-2004), Weiner (2004-13), David Prouty (2013-17) and Penny. Nussbaum had been among those under possible consideration for the search for an NHL players' association to succeed Fehr as executive director, two people familiar with the baseball union said, speaking on condition of anonymity because no statements were authorized.l.

Penny, 58, joined the baseball union staff as a senior labor attorney in 2010 after working at the National Labor Relations Board from 1988-2000 and the NHL union for a decade.

Perconte, 44, a former assistant U.S. attorney in Chicago, was hired by the union in 2017 as an assistant general counsel.