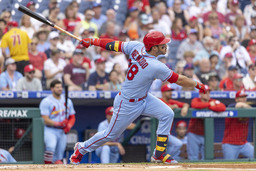 The Cardinals tied the MLB record for any inning with four in a row. It was the first time they had done it, and the 11th time overall in big league history.

After Phillies starter Kyle Gibson got the first two outs, Paul Goldschmidt singled before Arenado's two-run shot to left field on a slider started the long ball onslaught. Arenado's drive came a night after he hit for the cycle for the second time in his career in St. Louis' 5-3 loss to Philadelphia.

Gorman followed by driving a 2-1 cutter into the seats in right field. Then Yepez fouled off a 1-2 pitch before clearing the fence in left field to mark the first time since Sept. 19, 2002, that the Cardinals hit three homers in a row.

Carson finished the amazing power display by connecting on a 1-0 sinker that hit the facing of the second deck in right field on the first pitch he saw.

The last team to homer in four consecutive at-bats was the Chicago White Sox, who did it on Aug. 16, 2020, against the Cardinals.

The home crowd gasped when Lars Nootbaar followed Carlson and made solid contact on a flyball that was caught in deep left field but well shy of the warning track to end the inning.