Braves put closer Jansen on IL due to irregular heartbeat 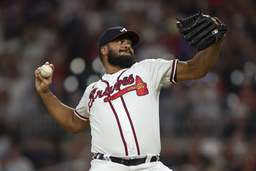 PHILADELPHIA (AP) Atlanta Braves closer Kenley Jansen was put on the 15-day injured list Tuesday because of an irregular heartbeat, the latest heart-related issue in the veteran right-hander's career.

The move was made retroactive to Monday when Jansen felt discomfort, manager Brian Snitker said.

In November 2018, Jansen underwent a cardiac ablation, a procedure to restore normal heart rhythm. He was first diagnosed with irregular heartbeat issues in 2011 and had an ablation the next year.

The 34-year-old Jansen signed a one-year, $16 million deal with the Braves in the offseason. He has gone 4-0 with a 3.58 ERA while converting 20 of 24 save opportunities.

"He's been unbelievable," Snitker said. "Having him has allowed us to use our bullpen depth."

A three-time All-Star, Jansen is second among active pitchers with 370 career saves.

Snitker expects to use the combination of left-handers A.J. Minter and Will Smith to close games in Jansen's absence. They are a combined 2 for 7 in save opportunities this year.

"It's another injury you have to deal with," Snitker said. "You can never have enough pitching. We have guys down there who have closed a lot of ballgames."

The Braves recalled right-hander Jesus Cruz from Triple-A Gwinnett to take Jansen's spot on the roster. Cruz has allowed one run in six innings for Atlanta this season.

Snitker also said star outfielder Ronald Acuna Jr. remained in Atlanta for treatment on his bruised left foot. Acuna is day-to-day and could arrive in Philadelphia as early as for Wednesday night's game.

Acuna fouled a ball off his foot in the third inning and later exited Saturday's 5-3 win over the Dodgers. He sat out Sunday's 5-3 loss to Los Angeles. X-rays and an MRI showed no fracture.