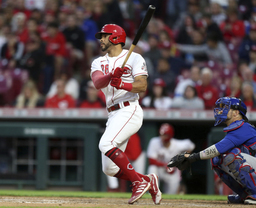 The pair quickly were separated.

Pham was in the starting lineup on Friday, batting third as the designated hitter. But, shortly before gametime, he agreed to be scratched pending results of an investigation by Major League Baseball.

The scuffle was witnessed by reporters and occurred before fans entered the ballpark.

"We're investigating it and learning as much as we can about the incident," Giants manager Gabe Kapler said, prior to the game. "We're taking it very seriously. Until we have a clear understanding of what happened, not willing to discuss it."