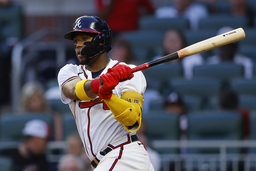 The team announced about 90 minutes before first pitch against Philadelphia that Acuna would sit. He woke up feeling sore and tested out his leg by running on the field before deciding to skip the game.

Acuna was diagnosed with a Grade 1 strain and is unlikely to play in the finale of the four-game series Thursday.

Acuna is hitting .292 with two homers, eight RBIs and eight stolen bases in 65 at-bats since returning from reconstructive right knee surgery April 28. The two-time All-Star and 2018 NL Rookie of the Year missed five games recently with right groin tightness. He went 2 for 3 with three RBIs and scored the decisive run in Tuesday's walkoff victory over the Phillies.

Atlanta has been cautious with Acuna, who tore his ACL last year and needed season-ending surgery.