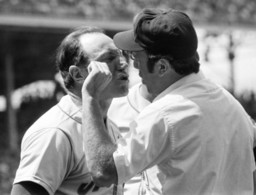 NEW YORK (AP) As a big leaguer, Joe Pignatano had a career that was more noteworthy than notable: He played in the last game at Ebbets Field, he homered off three future Hall of Famers and he hit into a triple play with his final swing in the majors.

It was out in the bullpen at Shea Stadium, where he tended relief pitchers and tomatoes for the 1969 Miracle Mets, where Pignatano's legacy really grew.

"He was fairly committed to taking care of his tomatoes," former Mets pitcher Jim McAndrew told The Associated Press.

Pignatano, who reached the majors as a catcher with his hometown Brooklyn Dodgers and became a longtime coach, died Monday at 92.

The New York Mets said Pignatano died in Naples, Florida, at a nursing home. He had been suffering from dementia.

Pignatano had been the last living coach from the 1969 Mets, who made a remarkable run under manager Gil Hodges to reach the World Series and then startled Baltimore and the baseball world for their first championship.

He remained as their bullpen coach through 1981.

"To me, he was Uncle Joe. He loved the city and loved talking about his days with the Dodgers and with Gil. He was a baseball lifer," former Mets star Lee Mazzilli said.

Pignatano made his major league debut with Brooklyn in 1957. On Sept. 24, he took over for future Hall of Famer Roy Campanella and caught the final five innings in a 2-0 win over Pittsburgh. It was the Dodgers' last home game before bolting Brooklyn for the West Coast.

In 1959, Pignatano got his biggest hit. In the second game in a best-of-three playoff against Milwaukee for the NL pennant, his two-out single in the bottom of the 12th at the Coliseum set up the winning run scored by Hodges as Los Angeles earned a World Series spot.

The Dodgers went on to win the championship, and Pignatano had a brief appearance behind the plate in the six-game win over the Chicago White Sox.

After stints with the Kansas City Athletics and San Francisco Giants, he joined the 1962 expansion Mets in midseason. The Mets were awful, setting a modern major league record for losses in going 40-120, and they wrapped up their season in inglorious fashion.

In their final game of the season, at Wrigley Field against the Cubs, they trailed 5-1 when Sammy Drake led off the eighth inning with a single and took second on a single by Richie Ashburn.

Pignatano was up next and sent a liner toward right field - "that ball was labeled base hit from the moment it left the bat" is how it was described on Mets radio.

Instead, Chicago second baseman Ken Hubbs went back and caught the ball and threw to first baseman Ernie Banks, who relayed to shortstop Andre Rodgers for a triple play.

It was Pignatano's last at-bat in the majors.

A career .234 hitter, he played 307 games and hit 16 home runs. Among the pitchers he tagged for homers were Robin Roberts, Warren Spahn and Jim Kaat, all of them Hall of Famers.

In 1965, Hodges was managing the Washington Senators when he asked Pignatano to join his coaching staff. In 1968, Pignatano went with Hodges to the Mets.

During the 1969 season, Pignatano discovered a stray tomato plant growing in the right field bullpen at Shea and kept it healthy. As the Mets continued to win, the plant became something of a good-luck charm and Pignatano's garden took root.

"It was his home away from home," McAndrew recalled Monday. "He had five or six hours a day down there with his tomatoes. He really took care of them. When we were on the road, the grounds crew helped out. They had the water."

Over the years, the ripe, red tomatoes grew and so did the stories about Pignatano's green thumb. He was always glad to talk about his garden.

But letting others enjoy his harvest? Nope, McAndrew said he never got to taste a single juicy tomato.

"He didn't share them. They were just for him," McAndrew said with a laugh. "He was going to reap the fruits of his bounty."