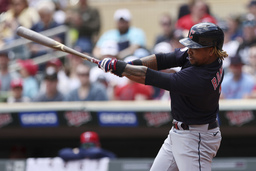 CLEVELAND (AP) Cleveland Guardians star third baseman Jose Ramirez will undergo X-rays and other tests on his right shin after being injured during an at-bat in Thursday's 4-2 loss to the Cincinnati Reds.

Ramirez collapsed in pain after fouling a ball off his shin in the eighth inning.

After going down, he rolled onto his back in the dirt near home plate, and the 29-year-old Ramirez needed several minutes to recover. He then hobbled back into the batter's box and promptly hit a single for his 34th RBI.

Ramirez was pulled for a pinch-runner after the hit.

Guardians manager Terry Francona said Ramirez, one of baseball's best all-around players, will have his leg checked for any serious damage.

"He's pretty sore," Francona said. "Hit above his (protective) pad, just below his knee. For him to react like that, he's a pretty tough kid. He's going to get some X-rays, but he's sore."

Ramirez has been in a slump of late, but he's still the biggest threat in Cleveland's lineup and the Guardians can't afford to be without him for too long.

It's possible he could miss a game or two, dependent on the X-ray results.

Ramirez signed a seven-year, $141 million contract extension with Cleveland on the eve of opening day.

Meanwhile, Francona, who just returned to the team after being out with COVID-19, will miss Friday's series opener against Detroit to have a minor surgical procedure. He's expected to be back Saturday.

Francona was sidelined for much of the past two seasons with serious medial issues. He managed just 14 games in 2020 due to gastrointestinal issues, and stepped away last July following foot surgery.

Bench coach DeMarlo Hale will fill in for Francona against the Tigers.