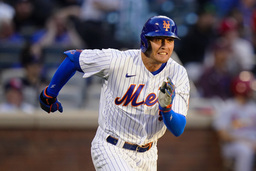 Mets leadoff man Brandon Nimmo is day to day with a bruised right quadriceps after fouling a ball off his right knee and leaving New York's game Tuesday night against the St. Louis Cardinals.

Nimmo swung at a pitch from left-hander Genesis Cabrera in the seventh inning and drilled it into the inside of his leg. He hobbled near home plate and was visited by a trainer, but he finished the at-bat. He hit a grounder to second base and tried futilely to sprint and beat it out.

The 29-year-old Nimmo limped off the field and was replaced in center field by Travis Jankowski.

"When I went to run and beat that out, it wouldn't fire," Nimmo said after New York split its doubleheader. "I just tried to get there the best I could, give it everything I had.

"It feels all right now, I just got a lump on it. We'll just take it day to day and see how it is in the morning."

A free agent after the season, Nimmo is batting .292 with a .397 on-base percentage atop New York's order.