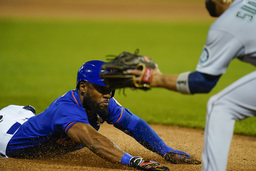 NEW YORK (AP) Mets ace Jacob deGrom had follow-up imaging that showed progressive healing in the stress reaction in his right scapula, and New York says he will continue to ramp up his throwing.

The Mets also announced Tuesday that outfielder Starling Marte had been added to the bereavement list, with right-hander Steve Nogosek recalled from Triple-A Syracuse and righty Adonis Medina added as the 27th player for a doubleheader against St. Louis.

DeGrom has not pitched this season and has been expected to be sidelined at least until June. The Mets shifted the two-time Cy Young Award winner to the 60-day injured list last week. He went on the IL opening day, April 7, after injuring his right shoulder blade late in an abbreviated spring training. He underwent imaging again on Monday.