Parra says he is retiring as player, becoming Nats assistant 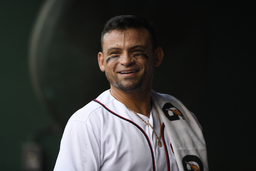 WASHINGTON (AP) Gerardo Parra says he is retiring from baseball after 12 seasons in the major leagues and will become a special assistant to Washington Nationals general manager Mike Rizzo.

"It's time for me to step aside to take on new professional and personal challenges," the 35-year-old outfielder wrote Monday on Instagram. "It's not an easy decision to make for any athlete, but I am happy with what I have achieved in these 12 years in the major leagues."

Parra said his new role with the Nationals "is undoubtedly a dream job to start a new chapter."

Parra became a fan favorite as he helped Washington win the 2019 World Series, making "Baby Shark" his walkup song. The Nationals released a video tribute to Parra, who signed a minor league contract with the team before this season but did not appear iny any games.