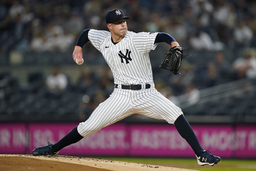 Kluber said there were a number of factors that led to him signing with Tampa Bay, but first and foremost was a chance to win a championship.

"I'm at the stage of my career where I'm trying to still win a World Series and I think that the success that this team has had the last few years makes it pretty obvious that they're in a position to do that," Kluber said. "This is a team I want to be part of."

Tampa Bay reached the World Series in 2020 but lost in six games to the Los Angeles Dodgers. Kluber was on the 2016 Cleveland team that dropped a seven-game World Series to the Chicago Cubs.

The right-hander, who won the Cy Young Award with Cleveland in 2014 and 2017, threw a no-hitter for the Yankees at Texas last May 19 and then made one more start before missing three months with a shoulder injury.

"Kluber was a priority target for us at the start," Tampa Bay president of baseball operations Erik Neander said.

Kluber was limited to seven starts and 35 2/3 innings during his last year with Cleveland, in 2019, and just one inning with Texas in 2020 due to forearm, shoulder and oblique injuries.

"I finished last season with no restrictions, healthy, so I'm approaching this offseason like a normal one," Kluber said. "Starting to get ramped up throwing now, which is always kind of an exciting part of the offseason."

"The experiences that he's had in this game, the accomplishments he's had in this game, we often speak about how beneficial it is to have someone with those types of credentials, that type of resume around younger, impressionable players and talent, there aren't many," Neander said. "There aren't many that are a better example for young players than Corey Kluber. So we're really excited about that."

Tampa Bay manager Kevin Cash was a Cleveland coach in 2013 and '14 before joining the Rays.

"When he's right, he's really, really special," Cash said. "Work ethic-wise it's off the chart. He's second to none."

The Rays were one of the teams that expressed significant interest in Kluber a year ago before he signed an $11 million, one-year deal with the Yankees.