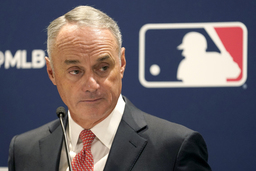 NEW YORK (AP) Major League Baseball and the players' union have agreed to move the upcoming deadline for teams to offer contracts to certain players in order to keep them out of potential limbo in the event of a work stoppage next month.

The tender deadline was moved from Dec. 2 to Nov. 30 at 8 p.m. The sport's collective bargaining agreement expires Dec. 1 at 11:59 p.m., and it's not expected that MLB and the union will agree on a new deal before then. A lockout and roster freeze could begin Dec. 2.

Teams have until the deadline to decide whether to offer 2022 contracts to players with fewer than six years of major league service, including those eligible for salary arbitration.

The labor dispute could take months to resolve, and if the Dec. 2 deadline passed during a roster freeze, players not yet tendered contracts might not know if they'd become free agents until shortly before the start of the season.