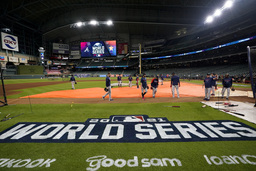 HOUSTON (AP) The Latest on Game 1 of the World Series (all times local):

Right-hander Kyle Wright and outfielder/pinch-runner Terrance Gore were added to the Atlanta Braves' roster ahead of Tuesday night's World Series game against the Houston Astros, and right-hander Jacob Webb and infielder Johan Camargo were dropped.

Wright has not made a major league appearance since June 23. The 26-year-old last pitched on Oct. 2, throwing seven shutout innings for Triple-A Gwinnett against Jacksonville. He was 0-1 with a 9.95 ERA in two big league games this year and 10-5 with a 3.02 ERA in 24 starts for Gwinnett.

Wright started twice in the 2020 playoffs, throwing six scoreless innings against Miami to win Game 3 of the Division Series and allowing seven runs while getting just two outs in taking the loss to the Los Angeles Dodgers in Game 3 of the Championship Series. Current Braves teammate Joc Pederson hit a three-run homer and Edwin Rios followed with a solo shot.

Gore was on the roster for the Division Series against Milwaukee and made one appearance, pinch running for Pederson in Game 2.

Gonzalez, a member of Houston's 2017 World Series champions, has not played since the final game of the regular season on Oct. 3. He hit .176 in 34 at-bats after the Astros signed him in August following his release from Boston.

Meyers injured his left shoulder crashing into a wall during Game 4 of the Division Series on Oct. 12 and has not played since.