Braves scratch Ynoa from Game 4 start in NLCS vs Dodgers 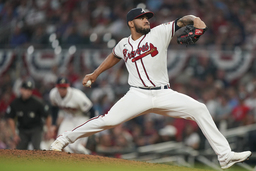 LOS ANGELES (AP) Huascar Ynoa was scratched with shoulder inflammation from his scheduled start for the Atlanta Braves against the Los Angeles Dodgers in Game 4 of the NL Championship Series, then removed from the postseason roster.

Ynoa first experienced discomfort on Monday but believed he would be able to pitch, Braves manager Brian Snitker said.

"He came early, got treatment, went out and played a little catch and it was really tight," Snitker said. "We're just not going to take a chance."

MLB approved a roster substitution for Ynoa, with left-hander Dylan Lee being added for the series. Ynoa is not eligible to return for the World Series, should the Braves advance.

Right-hander Jesse Chavez served as the opener Wednesday night at Dodger Stadium. Chavez pitched for the Dodgers in 2016.

"We'll have Jesse get it off the ground like he has before and it may be five hitters or six hitters or whatever it is," Snitker said.

Left-hander Julio Urias started for the Dodgers, who trailed the series 2-1.