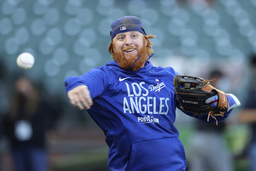 Third baseman Justin Turner is not in the Los Angeles Dodgers' lineup for Game 2 of the NL Championship Series because of a stinger on the right side of his neck.

Turner, a Dodger stalwart who played in 79 postseason games, aggravated his neck in batting practice before Game 1. He went 1 for 4, but manager Dave Roberts said he could tell Turner was bothered during Los Angeles' 3-2 loss to the Atlanta Braves.

Turner was available to pinch hit on Sunday, and Roberts said he will mostly likely be back in the lineup for Game 3 in Los Angeles on Tuesday. He had started 77 consecutive postseason games.

"We tried to treat it. We did treat it, and he felt that he wanted to give it a go and try to play through it," Roberts said. "He couldn't turn his head to the right. And got through the game, woke up feeling very similar, so I think that, obviously, Justin will do anything we ask, but I just don't think it's right to put him in that spot and, for us as a club, and I think we have other options, also."

Chris Taylor was set to start at third base.

Turner hit .050 in the Division Series against San Francisco, but Roberts said recent difficulties did not play into his thinking to keep Turner on the bench. He is 3 for 28 in this postseason.

"Certainly when guys are struggling, it's a combo," Roberts said. "It's the chase, and when you do get pitches to handle you're not finishing the at-bat. So I think that's what's happening to Justin. I think a lot of our guys are a little bit caught in between on velocity versus spin. So it's more about just the mindset of being aggressive in your zone and what you're good at, and everything outside of that, try not to offer at it."

Turner, who has spent the eight years with Los Angeles, hit .278 with 27 homers and 87 RBIs in 151 games during the regular season. He has gone 3 for 28 with one homer and seven strikeouts in the Dodgers' seven postseason games.