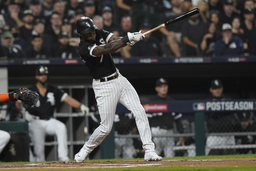 CHICAGO (AP) Whether he's slugging game-ending home runs in an Iowa cornfield or piling up hits in the postseason, Tim Anderson keeps showing a flair for the biggest moments.

Chicago's exuberant star did it again. And the White Sox kept their season going for at least another day.

Anderson singled three times and scored twice in another big playoff performance as the White Sox beat the Houston Astros 12-6 Sunday to avoid a three-game sweep in their AL Division Series.

He has 16 hits in six career playoff games, the most by any major leaguer over a six-game postseason span. He is 16 for 29 in that stretch, with seven hits in this series after collecting nine in last year's wild-card loss to Oakland.

"I just feel like I'm different," Anderson said before the game. "You know, I want to be in those moments. The camera is on. People are here to watch you. So, I mean, it is a show, so you just try to go out and give people a show."

There will be at least one more act for the AL Central champions after Anderson delivered another virtuoso performance in their first home playoff game since 2008.

Anderson said it felt like a "normal day" to him even though the White Sox were facing elimination. He sure looked cool and calm out there.

Anderson lined a leadoff single in the first inning against Rookie of the Year candidate Luis Garcia and scored on Eloy Jimenez's two-out base hit. With the game tied at 6, the White Sox scored three in the fourth. And, no surprise, Anderson had a hand in that.

He singled to shortstop Carlos Correa leading off against Yimi Garcia, moved to second on Luis Robert's hit and came around on Jose Abreu's base hit of Zack Greinke, putting Chicago on top 7-6. He added an RBI single during a three-run eighth, helping the White Sox bump their lead to 12-6.

That Anderson continues to come through in big spots is hardly a surprise. He delivered the ultimate Hollywood ending with his winning homer in the "Field of Dreams" game against the New York Yankees, one of the highlights of Chicago's run to its first AL Central championship since 2008.

With his theatrical bat flips and fun-loving attitude, the 28-year-old Anderson just might be Chicago's most marketable star. He won a batting title in 2019 and made his first All-Star team this year. And now, he is delivering in the biggest spot.