Marlins saw some positives, but not enough to contend in '21 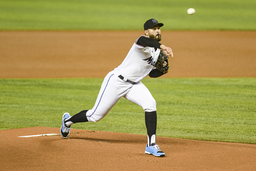 MIAMI (AP) The Miami Marlins played baseball over seven different months this season and had a winning record in exactly one of those.

That would be October. They went 2-1.

The hope entering the season was to play meaningful baseball in October, and the Marlins fell way short of that plan in 2021. They finished 67-95 and 21 1/2 games behind Atlanta in the NL East race, never really contending for anything a year after making baseball's expanded 16-team postseason in 2020.

"No one's happy," Marlins CEO Derek Jeter said. "No one should be happy, especially the players, coming off what they were able to accomplish last year, getting a taste of the postseason. I think the expectations were a little bit higher coming into this year."

The Marlins got off to a 1-6 start and played uphill the rest of the season, never getting to first place, never getting above the .500 mark. An eight-game losing streak from late May to early June took the Marlins to 10 games under .500; they never got higher than fourth place again in what wasn't exactly a loaded NL East, and the organization began giving younger players much more opportunities over the season's final two months.

"These guys have to step it up, show up at spring training and be ready to fight for a job," Marlins veteran Miguel Rojas said. "How are you going to be better so you can contribute to a winning team? That's the biggest question. I'm happy to see their progress, happy to see the opportunities, but at the end of the day it's going to be about how you handle next year when you have an opportunity to play for a winning team."

Manager Don Mattingly will spell out to players in the coming days exactly what he'd like to see them work on over the winter. There were some obvious things he liked, and some clear areas where the Marlins need to improve before next spring. Outfield depth is a question, as is the catcher position.

His hope is that the young core returns with a different, more mature mindset, born from confidence of playing this season.

The Marlins struck out 1,553 times this season, the second most in the majors and a team single-season record. The Marlins' batting average of .233 was almost low enough for another team record; the 2013 club batted .231. And Miami's 158 home runs ranked 28th out of the 30 MLB teams.

Interleague play aligned the Marlins with the AL East this season, which did Miami no favors. The Marlins went 2-2 against woebegone Baltimore and 1-15 combined against Tampa Bay, Boston, the Yankees and Toronto. The 3-17 mark tied for third worst by any team since interleague play started; Colorado (in 2012) and Pittsburgh (in 2010) both went 2-13 in interleague contests.

Miami's farm system was among baseball's worst when Jeter arrived four years ago. It's now considered one of the best and should get even better given that the Marlins are currently building an academy in the Dominican Republic. Jeter is eager to get that done as quickly as possible.