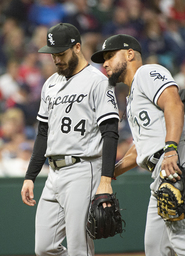 CLEVELAND (AP) Chicago White Sox starter Dylan Cease left a game Friday night after being struck on the right arm by a comebacker in the sixth inning against the Cleveland Indians.

The White Sox said Cease has a right triceps contusion and that X-rays were negative.

Cease took a shutout into the inning but was hit on his pitching arm by a one-hopper from Bradley Zimmer that rolled behind the mound with one out. Cease grabbed his arm and knelt behind the mound.

Chicago manager Tony La Russa, pitching coach Ethan Katz, a team trainer and the White Sox infielders surrounded Cease, who got to his feet and walked on the infield grass.

Cease threw a couple of pitches from the mound to catcher Zack Collins but walked to the dugout after a discussion with La Russa.

The White Sox clinched the AL Central on Thursday despite dealing with key injuries to several players.