Blue Jays' Borucki gets ban dropped to 2 games on appeal 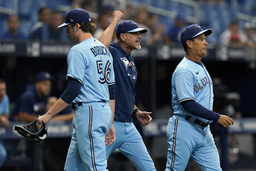 MINNEAPOLIS (AP) Toronto reliever Ryan Borucki had his suspension for plunking Tampa Bay outfielder Kevin Kiermaier reduced to two games after an appeal and began serving the ban Friday night during a four-game series in Minnesota.

Borucki was suspended three games and fined an undisclosed amount by Major League Baseball on Thursday. Blue Jays manager Charlie Montoyo got a one-game ban, which he served Thursday.

Borucki was ejected from Wednesday's game after drilling Kiermaier in the back in the eighth inning. That came two days after Kiermaier scooped up a Toronto scouting report that had fallen off catcher Alejandro Kirk's wristband during a play at the plate and refused to hand it back.

"I wanted to go down and away, as I was coming forward I felt the ball slip out of my hand and I missed up and in, and I accidentally hit him," Borucki said. "They can think want they want over there in their locker room, but it is what it is."