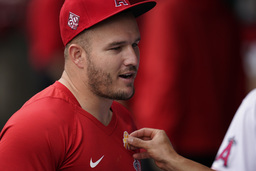 CHICAGO (AP) Mike Trout is likely done for the year. Same for Jo Adell, another talented outfielder for the Los Angeles Angels.

Manager Joe Maddon said Wednesday he would be very surprised if Trout played again this season. The three-time AL MVP injured his right calf running the bases May 17 and had a setback last month, but he has left open the possibility of returning this year.

Adell was placed on the 10-day injured list after he got hurt when he crashed into the wall in left while trying to catch Garrett Stubbs' RBI double in the ninth inning of the Angels' 4-2 win at Houston on Saturday night.

He hit the back of his head on the wall on the play, but the team said he had a left abdominal strain.

"The left side of his body, he's feeling something in there where he can't really rotate or swing the bat, and that's pretty much it," Maddon said.

The fourth-place Angels have 17 games left after topping the Chicago White Sox 3-2 on Wednesday night. While leaving open the possibility that Adell could return, Maddon said "it would be hard to imagine."

Adell, 22, was selected by Los Angeles with the No. 10 pick in the 2017 amateur draft. He made his big league debut last year, batting .161 in 38 games, but he showed more flashes of his potential this season.

Adell had three hits and three RBIs in his season debut with the Angels on Aug. 3. He is hitting .246 with four homers and 26 RBIs in 35 games.

"Wonderful improvement in a lot of his game," Maddon said. "You could take any part of it and there's improvement."

Trout has been trying to come back this year, but he experienced soreness in his calf after running the bases on Aug. 28. A chuckling Maddon called his comments on Trout an "unofficial statement," not wanting to jump in front of the star slugger in ruling him out, but he indicated there just isn't enough time left for him to play again.

"I watch him do his work and it's been the same. The guy is like so wanting to be out there," Maddon said. "You watch him in the dugout every night, he's on every pitch. My God, he's in on every pitch. He comes over and discusses things with me during the course of the game. He's absolutely, totally engaged."

Infielder Jose Rojas was recalled from Triple-A Salt Lake to replace Adell on the roster. Rojas is batting .211 with four homers and 10 RBIs in 46 games with Los Angeles this season.