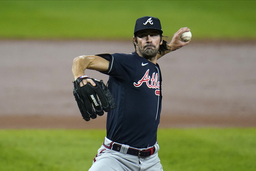 LOS ANGELES (AP) Four-time All-Star Cole Hamels signed a $3.05 million, one-year contract Wednesday with the Los Angeles Dodgers through the end of the season, adding more depth to a pitching staff that has been racked with injuries.

Halem will earn about $1 million from the deal, signed with less than two months less in the season.

He agreed to accept an optional assignment to the minors, and the team agreed to recall him no later than Sept. 2.

Hamels held a showcase for teams last month. Dodgers manager Dave Roberts said after Wednesday night's win over Houston that the left-hander will throw a simulated game at Dodger Stadium on Saturday as the club continues to stretch him out.

"I am thrilled this happened," Roberts said about the signing. "I have long admired Cole and how good of a player he is. He is going to be a boost for us, but we have to get that pitch count built up."

The 37-year-old Hamels was limited to one start last season with the Atlanta Braves due to shoulder inflammation and arm fatigue. He went 3 1/3 innings on Sept. 16 at Baltimore and allowed three earned runs.

To make room for Hamels on the 40-man roster, the Dodgers designated right-hander Yefry Ramirez for assignment.