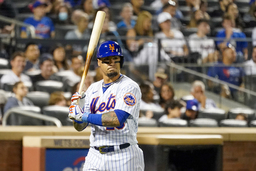 The two-time All-Star launched a 1-2 cutter from starter Wade Miley to left field in the sixth inning for his 23rd homer of the season, trimming New York's deficit to 4-3.

Baez took a long look at his drive at home plate and tossed his bat aside before circling the bases. With fans chanting "Ja-vy! Ja-vy!" he came out of the dugout for a curtain call and raised both arms to spur on the crowd.

El Mago became the 30th player to homer in his Mets debut.

The flashy shortstop was greeted with several warm ovations Saturday, including during pregame introductions and even when he caught an easy popup for his first chance on defense.

Baez switched from No. 9 with the Cubs to No. 23 with the Mets. Center fielder Brandon Nimmo wears No. 9 for New York.