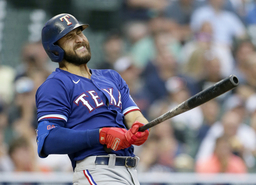 All-Star slugger Joey Gallo is headed to the Bronx to give the New York Yankees some much-needed punch from the left side.

The Yankees have reached a deal to get Gallo from the Texas Rangers, a person familiar with the trade told The Associated Press. The person spoke on condition of anonymity Wednesday night because the move had not yet been announced and was subject to approval of medical records of the players involved.

"Wow, a guy that can hit it out of any ball park. I don't think he gets enough credit for the type of defense that he plays," Aaron Judge said after the Yankees won 3-1 in 10 innings at Tampa Bay.

"Also, just talking with Rougy and a couple guys that have played with him, man, what a guy that you want in you clubhouse, a guy that shows up everyday ready to play. He's going to fight until the very end. If that's true and it comes true that we get him, I think it's going to be something special for our team," he said.

"That's going to be huge, just to give the pitchers a different look," Judge said. "When we go up there with all right-handed guys, pitchers kind kind of get into grooves and kind of get into rhythms, but if you kind of mix it up a little bit and throw some lefties in there and a lefty that kind of bolt you on any pitch, it's going to be big for this lineup and for this team."

Gallo is hitting .223 with 25 homers, 55 RBIs and a major league-leading 74 walks. The 6-foot-5 slugger has also been a Gold Glove right fielder for Texas, but presumably would play left for the Yankees, who have Judge as their regular right fielder.

"He's a great player and I have heard nothing but good things about him, so if it happens, I'll be really excited," infielder DJ LeMahieu said. "If do we get a guy like that, like wow, that would be a pretty good guy to add to the lineup."

Yankees reliever Chad Green said players first heard about the trade from a fan sitting behind the dugout during the game at Tropicana Field.

Gallo had repeatedly expressed his desire to stay with the rebuilding Rangers, who took him with the 39th overall pick in the 2012 amateur draft. But he was scratched from the starting lineup only moments before the start of Wednesday night's home game against Arizona, with the team saying the move was for non-medical reasons.

Judge also was scratched from the starting lineup Wednesday night, a day after returning from the COVID-19 injured list. Judge said blood work and other tests related to coming off the IL ran late, and and that some initially had been a little off and needed double checking. He struck out as a pinch-hitter in the fifth inning against Tampa Bay and hit a tiebreaking single in the 10th.

He said the worst symptoms were a headache and sniffles, similar to an allergy. Asked whether he had been vaccinated, Judge responded: "I'm not going to get into that. ... That's something I'd like to keep with - talk with my doctor about."

He is not sure how he contracted COVID-19 and had tried to figure out whether he got it during the All-Star break in Denver.

Gallo is owed $2.2 million from his $6.2 million salary. He is eligible for arbitration next winter and can became a free agent after the 2022 season.

In his final game with the Rangers on Tuesday night, Gallo hit his first home run since the All-Star break, a towering three-run shot to put Texas ahead on the way to a 5-4 victory over the Diamondbacks to end a 12-game losing streak. Gallo also had two more assists from right field, giving him a career-high nine this season.

Gallo gave what became a prophetic goodbye to Rangers fans when he started thanking them in a postgame interview Tuesday night on the team's television broadcast. He told reporters after that he didn't want to miss an opportunity to thank everyone.

"We don't know the future and I don't want to like miss an opportunity to tell everybody I appreciate it," Gallo said. "I've been 10 years here. I remember last year when I almost got traded, there was like a lot that I was thinking, `Man, I wish I would have done this, I wish I would have said something.' ... I want the fans to know that I appreciate everything they've done for me and supporting me, and buying my jerseys and whatnot. You know, I really appreciate it."

Gallo has more outfield assists (four) than hits (three) since participating in the All-Star Game and Home Run Derby two weeks ago. He is just 3 for 34 in those 11 games, and his homer for a 5-2 lead against the Diamondbacks snapped an 0-for-16 slide.

The Yankees are 8 1/2 games behind first-place Boston in the AL East and trailing Tampa Bay, Oakland and Seattle in the race for two wild cards.

The last-place Rangers are on pace for their first 100-loss season since 1973, the franchise's second season in Texas. Their last winning season was 2016, when they won the AL West before getting swept by Toronto in a best-of-five Division Series.

"He has a good track record and he's respected throughout the whole league," Yankees pitcher Nestor Cortes Jr. said. "It's going to be a good addition for us."