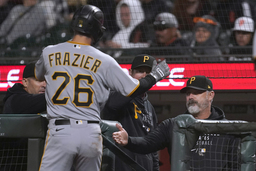 Frazier was the National League starter in the All-Star Game this month. He leads the majors with 125 hits and is batting .324. He'll join a potent Padres infield that includes Fernando Tatis Jr., Manny Machado and Eric Hosmer.

Pittsburgh is receiving infielder Tucupita Marcano, outfielder Jack Suwinski and right-hander Michell Miliano in the swap. Pittsburgh is sending $1,403,575 to the Padres in the deal, accounting for most of the remaining $1,572,043 in Frazier's $4.3 million salary. The MLB trade deadline is this Friday.

The Padres are 58-44 and third in the NL West, and hold a cushion for the second wild-card spot. The Pirates have the second-worst record in the NL.

Frazier was pulled in the eighth inning as part of a double switch in Sunday's 6-1 loss at San Francisco.

Marcano is San Diego's No. 5 prospect, according to MLB Pipeline. The 21-year-old shortstop made his big league debut this year, hitting .182 in 44 at-bats with the Padres. He was sent down to Triple-A El Paso in early June. He's hit .272 with six home runs and 26 RBIs in 44 games for El Paso this year.