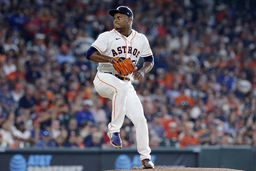 HOUSTON (AP) The Houston Astros lost their combined no-hit bid in the eighth when Isiah Kiner-Falefa singled to start the inning for the Texas Rangers.

Framber Valdez needed 99 pitches to get through six innings and Bryan Abreu took over for the seventh.

Ryne Stanek came on in the eighth and Kiner-Falefa smacked his second pitch into shallow center field for the hit. Center fielder Myles Straw sprinted in and dived to try and make the catch, but it bounced just in front of his glove.

Andy Ibanez reached on a fielding error by Carlos Correa to start the seventh when he bobbled his grounder and didn't attempt a throw to first. Abreu retired David Dahl on a fly out before striking out Charlie Culberson and Jose Trevino to end the inning.

Valdez struggled with command on Saturday night and tied a career high by walking six batters. Four of his six walks came in the first two innings. He settled down after the second and retired 12 of his last 14 batters.

The 27-year-old left-hander was making his 11th start of the season after missing almost two months after fracturing his left index finger in spring training.

Valdez struck out four and retired the rest on groundballs. The Rangers, who have lost a season-high 10 straight, did not hit a ball in the air through six innings.

Trevino hit a sharp ground ball with one out in the fifth that looked like it might get by Correa, but he spun to grab it. He bobbled it after the stop, but got it to first just before Trevino touched the bag.