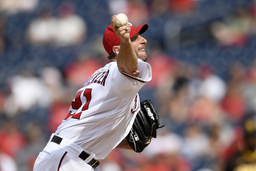 BALTIMORE (AP) Washington Nationals ace Max Scherzer was scratched from his start at Baltimore on Saturday night with what the team described as mild right triceps discomfort.

Manager Dave Martinez said before the game that Scherzer had an MRI and it was "extremely clean" - he's expected to make his next start. Jon Lester is starting Saturday in his place.

The three-time Cy Young Award winner, who turns 37 on Tuesday, has been the subject of trade speculation as the Nationals continue to struggle. His absence now is another issue for the Washington rotation, which has been without Stephen Strasburg since early June because of lingering neck problems.

On Friday, Martinez said Strasburg was still having neck discomfort, and the team was trying to figure out what the best course of action was for him going forward.