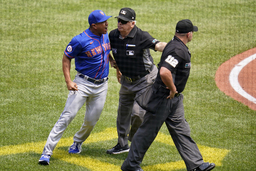 CINCINNATI (AP) New York Mets manager Luis Rojas was suspended Monday for two games and fined for excessive arguing with umpires, an outburst that followed a bizarre play a day earlier at Pittsburgh.

Rojas was to begin serving his suspension Monday night at Cincinnati. He said he was not offered the chance to appeal. The amount of the fine was not revealed.

"I'm a little upset that I'm going to be missing the next two games," Rojas said before going out to pitch batting practice. "I missed the team for 8 2/3 (innings) yesterday, not getting to watch from the dugout. But the league's got to do what they gotta do. We know how sometimes things get heated up."

Mets starter Taijuan Walker made a huge misplay in the first inning Sunday with the bases loaded and the Pirates leading 3-0. Kevin Newman hit a dribbler down the line and the ball started in foul territory but then began spinning back toward the line.

Walker swooped in and swatted at the ball, trying to make contact while it was still foul. But TV replays showed the ball was touching the chalk when Walker hit it, and plate umpire Jeremy Riggs called it a fair ball.

Walker turned to argue the call as the ball rolled toward the Pirates dugout. No Mets reacted to retrieve it and all three Pittsburgh runners came around to score.

Walker said he didn't realize the ball was still in play. Rojas immediately ran out to argue the call and was ejected. He said he wanted the umpires to conference to make sure the call was correct, even though the play was not reviewable.

"I got hot because it was a bad call," Rojas said Monday. "He made an embarrassing play. That's what led me to escalate the way I did. It's the heat of the moment, the play. Getting close and arguing. I wanted it to be checked with the other umpires and I was denied. I still firmly believe it was foul. I would love for a play like that to be reviewable."

Rojas said he would watch Monday night's game on television. He had to leave the clubhouse after the pregame workout.

"I'll be rooting for the guys," Rojas said.