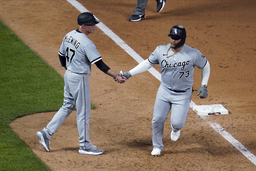 White Sox manager Tony La Russa said Yermin Mercedes made a "big mistake" when he crushed a 3-0 pitch from infielder Willians Astudillo for a solo homer in the ninth inning of Monday night's 16-4 victory over the Minnesota Twins.

The 76-year-old Hall of Fame manager said he was yelling for Mercedes to take. Instead, the rookie drove the 47-mph eephus pitch deep to center for his sixth homer - and touched off yet another debate about baseball's unwritten rules.

The issue clearly lingered, too.

"I don't have a problem with how the Twins handled that," La Russa said after Chicago's 5-4 loss.

Before the game, La Russa called out Mercedes.

"That's just sportsmanship, respect for the game, respect for your opponent," La Russa said. "He made a mistake, so there will be a consequence that he has to endure here within our family."

The 28-year-old Mercedes has been one of baseball's biggest surprises so far this year. He collected two more hits and walked Tuesday night. He is batting a major league-best .368 with 25 RBIs in 37 games.

Mercedes' swing put the spotlight back on lingering questions about how the game should be played, with a new wave of players challenging what is regarded as proper on-field decorum. While bat flipping was once frowned upon in the sport, it has now almost become just another part of the game.

Baldelli said he was surprised to see Mercedes swing in that situation.

"That being said, we've talked about this topic before, every team is going to make their own decisions," said Baldelli, a former big league outfielder. "I think some of the more traditional kind of hard and fast rules that we would play by, some of them have gone out the window."

Young Padres slugger Fernando Tatis Jr. hit a grand slam on a 3-0 pitch off Juan Nicasio with San Diego leading by seven runs last August in a game it eventually won 14-4. That play drew a rebuke from Jayce Tingler, Tatis' manager, for missing a take sign.

After La Russa and Mercedes talked before Tuesday's game, shortstop Tim Anderson backed Mercedes in an Instagram comment under an NBC Sports Chicago post featuring pulled quotes from the manager and the slugger.

San Francisco Giants pitcher Alex Wood also weighed in, posting on Twitter that he felt a position player on the mound meant "all `rules' are out the window."

"Plus do y'all realize how hard that is to launch a 49mph pitch 400 feet lol? Give the people what they want," Wood wrote.

La Russa didn't feel like Astudillo pitching changed the equation very much. La Russa said he apologized to the Twins.

"He's not going to do that again," La Russa said. "I heard he says something like I played my game, but no, he doesn't. He plays the game of Major League Baseball that respects the game, respects the opponents, and that was not (it). And he's got to respect the signs. When he gets the take sign, he takes."

La Russa was hired by Chicago in October in a surprise move, putting him back in the dugout for the first time since he won the World Series with St. Louis in 2011. While it has been a a little bumpy so far - La Russa wasn't aware of an extra-inning rule that played a role in a loss on May 5 - the White Sox are on top of the AL Central with a 25-16 record.

La Russa said he talked to Mercedes, and called what happened "a learning experience."

"The fact that he's a rookie and was excited helps explain why he just was clueless," La Russa said. "But now he's got a clue."