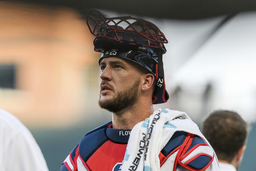 MILWAUKEE (AP) Veteran catcher Tyler Flowers has retired a week after signing a minor league contract with the Atlanta Braves.

MLB.com first reported Flowers' decision and noted that he hurt his back last weekend. Braves manager Brian Snitker confirmed Flowers' retirement while speaking to reporters before their game Friday with the Milwaukee Brewers.

Flowers, 35, played for the Braves from 2016-20 after spending seven seasons with the Chicago White Sox.

"You don't appreciate guys like that enough until you don't have him," Snitker said. "I just think the presence that he had in the clubhouse, the stability that he added, the professionalism. He had a really, really strong, good career. He's just a wonderful person, carried himself as a pro all the time. It's a really good career - a really good career. Hopefully he stays around and helps us out."

Flowers had signed a minor league deal after Braves catcher Travis d'Arnaud hurt his thumb applying a tag at the plate in a game against the Toronto Blue Jays, resulting in an assignment to the 60-day injured list.

The only catchers on the Braves' roster are William Contreras and Jeff Mathis.

He played at least 82 games every season from 2013-19 and was regarded as one of the game's top pitch framers.