Yankees have no new COVID-19 cases, but injuries mount 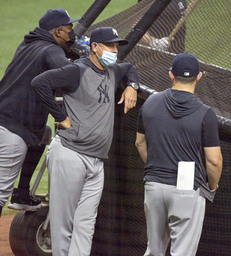 The Yankees, however, are dealing with other injuries.

Center fielder Aaron Hicks had an MRI that revealed a torn tendon sheath in his left wrist. Boone said the team will initially try to treat the injury with medicine, and if that goes well, Hicks could be available this weekend.

Hicks, however, could require surgery if the medicine is not effective.

"I think it could go either way," Boone said.

Slugger Giancarlo Stanton was scratched with left quad tightness less than an hour before the first pitch. His status for the rest of the series is uncertain.

The team revealed earlier this week that shortstop Gleyber Torres tested positive for the coronavirus despite being fully vaccinated and having previously had COVID-19. Torres could return to the lineup in fewer than 10 days, Boone said.

Asymptomatic vaccinated people can be cleared to return if they test negative twice.

In addition to Torres, New York has three coaches and four traveling staffers that are breakthrough positives, meaning they tested positive despite being fully vaccinated. At least one of those people who tested positive has since gotten a negative result - Boone didn't reveal any other details.

"The good news is we had another day of negatives," Boone said. "I don't ever want to say we're in the clear again but it's a good sign that we had a couple of days of negatives."

Orioles manager Brandon Hyde said his team did not need to make any changes in its routine, as far as wearing masks or social distancing, because of the positive tests with the Yankees.

"It doesn't affect us at all," Hyde said.