Odor put on IL by Yankees with sprained left knee 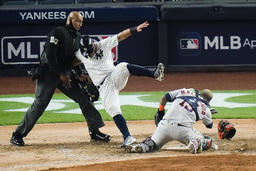 NEW YORK (AP) Second baseman Rougned Odor was put on the 10-day injured list by the New York Yankees with a sprained left knee on Wednesday.

Odor was hurt Tuesday night when his knee slammed into Houston catcher Martin Maldonado's head as he reached the plate and scored in the sixth inning of New York's 7-3 win.

Odor appeared to be trying to avoid DJ LeMahieu's bat, which was lying in the right-handed batter's box after he hit a soft grounder to third for an infield single. Odor came around when third baseman Alex Bregman overthrew first for an error.

Odor was acquired by the Yankees from Texas on April 6 and became a regular in the New York lineup with a coveted left-handed bat. The 27-year-old is hitting .164 with four homers and 11 RBIs.