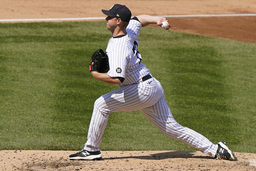 Nelson figures to be used as an opener. He will be making his first start and three relief appearances this season. He has a 9.00 ERA in four innings.

King was 1-2 with a 7.76 ERA in four starts and relief appearances during last year's pandemic-shortened season.

Left-hander Jordan Montgomery (1-0) starts for the Yankees on Saturday and ace Gerrit Cole (2-0) on Sunday.