Boone better with pacemaker, to return to Yanks this weekend 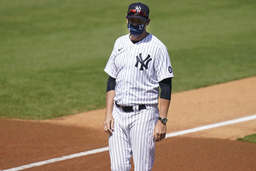 "I guess I was having more episodes this winter of just kind of getting up and feeling real light-headed and almost like at times was going to pass out and just having more days of fatigue on simple matters," the New York Yankees manager said Friday. "So that caused me to want to reach out and just go get checked up."

Boone had open heart surgery on March 26, 2009, while he was a player with the Houston Astros, a procedure to correct a swelling of the aorta. The condition had been first discovered when he was in college.

He underwent yearly checkups since and said electrocardiograms this winter came back good, with no change, But when Boone was monitored for several weeks, he was found to have a heart rate as low as 30-39 beats per minute, well below the 60-100 considered normal for adults.

So he left the Yankees on Wednesday to have a pacemaker inserted at St. Joseph's Hospital in Tampa, Florida.

Boone was discharged Thursday and hopes to return to the team - and possibly the dugout - on Saturday or Sunday after passing Major League Baseball's novel coronavirus protocols.

"Me and my new buddy are doing quite well," he said during a Zoom news conference Friday.

Boone's pacemaker is to keep his heart rate from dropping below 50-60 or from rising too high. He said his only health restriction was he can't raise his left hand over his head for about a month following the surgery.

"I feel great," Boone said. "I can't believe how good I feel. It makes me really glad that I got this done because I certainly the last couple of months have not felt anywhere close to how I felt this morning, even yesterday morning getting out of the hospital. So really excited about it, excited to get back."

Now 47, Boone is entering his fourth season as manager of the Yankees, a job not lacking stress. He went to the team's Steinbrenner Field spring training site for a nasal swab Friday as part of COVID-19 testing and would have resumed work had he not been required to wait because of the need for negative tests results to be processed.

Boone had given only Brian Cashman and a few of his coaches lead time to know what was likely to occur.

"I did some things and started getting tested because there were some signs there that I wasn't feeling the way I should be. But I think now that I've got this it's made me realize that, man, I wasn't feeling good, just energy level, just not myself," Boone said. "And I feel like I had to reach for it every day in a way. And yesterday, waking up and even more so today, I just feel kind of ready to go and ready to tackle things. And honestly sitting here, it's different than it was a couple of days ago and probably for the last few months."

Cashman said Boone initiated a Zoom meeting at 7:10 p.m. Wednesday, just an hour or two after surgery. Boone watched Thursday's 15-0 exhibition loss against Philadelphia on his iPad and said pitching coach Matt Blake tried to get him off the phone Friday morning when the manager inquired how bullpen sessions had gone. He planned to watch Friday's game against Detroit on the YES Network.

Boone was moved by a video Yankees players - socially distanced - sent to him, a message Boone thought was recorded from the pavilion behind third base at Steinbrenner Field. Brett Gardner, New York's senior player, took the lead.

"Gardy just kind of spoke for everyone, and then everyone just kind chimed in from the background with some smart-aleck comments that were good," Boone said. "But it meant a lot, it really did, just to see those guys, to know they were thinking about me."

Boone did not think the rigors of managing the Yankees contributed to his condition and that it likely was congenital.

"I don't think it's stress-related at all," he said. "My understanding is my way of life or anything moving forward or leading up to this point were not contributors. I'm looking forward to get back on the bike because my bike ride, that's one of the areas where I noticed. I like to ride the Peloton and the last couple of months, I've been not as durable on the bike, so hopefully I'm looking forward to get back on their and see if I can do a normal ride and up my ranking on the Peloton."

Bench coach Carlos Mendoza has taken over as acting manager. The 41-year-old Mendoza was a minor leaguer mostly with San Francisco and the Yankees from 1997-09 and is starting his 13th season working for the Yankees. He interviewed during the offseason for manager openings in Boston and Detroit.

"I think the industry recognizes who Carlos Mendoza is," Cashman said. "Carlos is extremely talented, extremely organized, bilingual. The players trust him. You know, he's a superior candidate for the next chair within the industry. And we're fortunate right now, and he served us well every step of the way in every capacity he served us. ... Clearly he is organized. He is extremely knowledgeable. I don't know if anybody works harder than Carlos Mendoza, and his ceiling is extremely high. So I was bracing myself if we lost him."