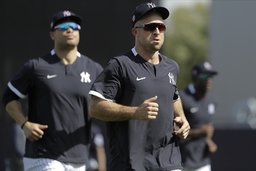 Manager Aaron Boone said Stanton was hurt near the end of defensive drills on Tuesday. An MRI found a Grade 1 strain.

"It will probably put us against it a little bit," Boone said Wednesday. "I would say it's time for him to get back, but then getting built up and stuff. We'll see."

The Yankees put a major league-record 30 players on the injured list last year, with Stanton missing most of the season.

The AL East champion Yankees open on March 26 at Baltimore.

Stanton played in just 18 games due a number of injuries last season, batting .288 with three homers in 59 at-bats. He hit 38 homers in his first year with the Yankees in 2018, one year after a going deep a career-high 59 times in 2017 with the Miami Marlins.

Boone feels Stanton will be able to take advantage of replicating at-bats from last year's rehab assignments and indoor work.

"So, I feel like from a hitting standpoint, he saw a lot of reps last year for being in a way a lost season," Boone said.

The outfielder/designated hitter signed a $325 million, 13-year contract after the 2014 season.

"It's disappointing because you want to get guys going and built up," Boone said. "But it's just a little bump in the road and we're equipped to handle it."

"We'll have those conversions as he gets healthy and going," Boone said. "See what it all looks like."

Masahiro Tanaka gave up two runs and two hits over two innings Wednesday against the Washington Nationals in his first start since arthroscopic surgery on his right elbow.

"A couple pitches obviously that I need to clean up but overall for the most part I liked how most of my pitches we're coming out from my hand," Tanaka said through a translator. "I also liked that how I was able to make adjustments in the moment."